The Bombay Burmah Trading Corporation, Limited (BBTCL) is a 150 year old company. The company founded its fortunes on teak in the year 1863, as a public company, and everything that followed is history. BBTCL has diversified its interests into tea, coffee, other plantation products, auto electric and white goods parts, horticulture and landscaping services, healthcare products (viz.) dental, orthopaedic and opthalmic products. Today, BBTCL is one of the few oldest companies of pre-independence era, still flourishing with its core values, ethics and above all, competency in trade. It is the second oldest publicly quoted company. The BBTCL Group has an annual consolidated turnover of US 1.2 billion dollars. The company is a leading concern of the Wadia Group, a reputed Indian business house with interests in plantations, foods, textiles, chemicals, electronics and light engineering, health care and real estate. Bombay Burmah, Bombay Dyeing, Britannia and GoAir are the flagship companies of the Wadia Group.

Bombay Dyeing has declared uninterrupted dividends for over a hundred and twenty five years.

In the Domestic Market, the company sells Bed, Bath and Home furnishing Products, as well as Clothing for Men, Women and Children through its network of over three hundred Exclusive Retail shops all over India.

In the international market, the company sells to the top Bed and Bath companies around the world.

Britannia, India's No.1 food brand for 10 consecutive years, is one of India's best known and most admired brands. Approximately 2 million people buy Britannia food products every day. Rated among the Top 10 ‘Most Trusted Brands' across all product categories, it is also the No.2 Food Brand in a survey conducted by AC Nielsen.

The company's offerings are spread across a broad spectrum, ranging from health foods to an economical food range, to the more lifestyle oriented products. It has a market share of approx 31% and sells through a network of over three and half million retail shops.

NPL is a pioneer in India for peroxygen chemicals and is the largest manufacturer of Hydrogen Peroxide in India, with an installed capacity of 95,000 MTPA on 50% w/w. basis. Hydrogen Peroxide is manufactured to international standards by National Peroxide Limited, using the auto-oxidation process, at its most modern and up-to-date plant near Kalyan, Maharashtra.

Hydrogen Peroxide is a highly versatile chemical used in various industries like Pulp & Paper, Textile and other Chemical Industries for Bleaching, Chemical synthesis, Environmental control / Effluent treatment, Sterilisation etc. The use of Hydrogen Peroxide provides a very “clean” process without the production of any harmful or environmentally unsafe products.

Wadia Techno-Engineering Services Limited (WTESL) which was formerly called Gherzi Eastern Limited (GEL) established in 1960 is a Leader in Design, Engineering and Project management services for Industrial, Commercial, Residential, Infrastructure and Hospitality Projects. Wadia group have consolidated their majority holding to 100% with effect from 8th November 2012 and the company's name was changed from Gherzi Eastern Limited (GEL) to Wadia Techno-Engineering Services Limited (WTESL)

Wadia Group was fully managing the operations and business of erstwhile Gherzi Eastern Ltd. It continues to do so in the new name of Wadia Techno-Engineering Services Ltd, with the same team, offices, PAN and Service Tax numbers.

Founded as GoAir, GO FIRST, which was recently rebranded from GoAir, is the aviation foray of 285-year-old Wadia Group that comprises leading brands including 150-year-old Bombay Burmah, 140-year-old Bombay Dyeing, 102-year-old Britannia Ltd., 67-year-old National Peroxide Limited, a nine year-old Bombay Realty. Go FIRST aims to make air travel affordable and accessible to the masses. It has flown 83.8 million passengers since fiscal 2010 and as of December 31, 2020. As of January 31, 2020, GO FIRST operates flights across 37 destinations – 28 domestic and 9 international. The airline’s network is spread across cities in India and abroad.

Bombay Realty is transforming and redefining the Mumbai skyline with two mixed use developments in the centre of Mumbai. These prime locations are being developed into world-class residences, offices, hotels, serviced apartments, branded residences, hospitals, schools and retail. Bombay Realty seeks to create mixed-use developments that synchronize the ability to LIVE.WORK.PLAY.TM all at one place.

Driven by the vision to excel, the Wadia Group has scaled heights in the field of entrepreneurship. Committed to advancement and innovation, we look for means to reinvent ourselves and set fresh standards of quality. Standing on a century-old foundation of goodwill and trust, we are surging ahead in various enterprises and venturing into new avenues of creation and knowledge. 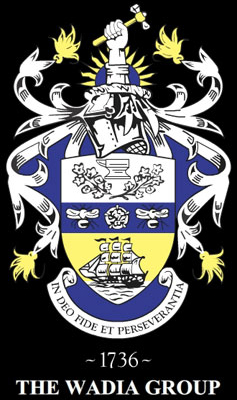